I received the “pearl of great price,” the gift of Christian Science, eight years ago. Since then, I’ve had innumerable blessings in the form of overcoming severe health challenges, getting a good job, and strengthening relationships when I have turned to Christian Science. I was given purposeful work in a local Christian Science Society after I became a member, and I also took Primary class instruction. My love for church work and the love I feel from the society members impel me to come back almost every weekend, though I am posted in a different city.

One morning about a year ago, I was going to a bus stand in Gurdaspur (a city in Punjab, India) on my motorcycle to catch a bus to Pathankot (another city). As I made a turn, a boy on a motorcycle came from the opposite direction and hit my bike. Though neither he nor I fell, I felt a jerk on my left wrist. At that time it was not hurting much, so I continued to Pathankot. But that afternoon my wrist started to hurt a lot and swelled. I was unable to move it. 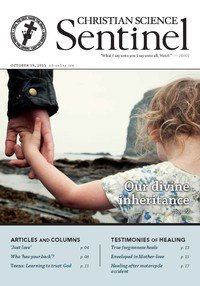