'My breath returned to me'

One day earlier this year I awoke unable to catch my breath. I got out of bed, assuming that walking around would do the trick, but the condition became worse. I lay back down and tried to take big gulps of air, but it felt as though something was weighing down on my lungs. I grew more and more fearful, thinking, “This is the end—I’m drowning on dry land.”

Because it was an emergency, my wife called 911. She isn’t a Christian Scientist, and although she fully supports my reliance on prayer for healing, this was a natural response to the situation. The buzzer in our apartment doesn’t work, so she told the emergency team they would have to call her and she would come down from the third floor to let them in.

Send a comment to the editors
NEXT IN THIS ISSUE
Testimony of Healing
Emergency responders, armed with prayer 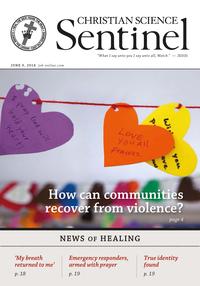