God is always with us

I grew up in Georgia, a small country in the South Caucasus. In Georgia most people are Orthodox Christians, and I was raised in that religion. I always believed in God and my religion. Then, in October 1999, I met an American, who became our family’s friend. He did not speak Georgian, we did not know English, but we all could speak some Russian, so we communicated in that language.

Our American friend was a very friendly and happy person. One day he gave me a little pamphlet about Christian Science. Although I didn’t speak English at that time, I could read the pamphlet because it was in both Russian and English. I read the pamphlet every day. I found that the ideas in it made my life better. For example, in 2003, I was promoted from a part-time to a full-time school teacher, and in 2007, I was named the best teacher in the elementary school where I taught. I had been living in my parents’ home at the time, so when I received a pay raise, the extra money helped me, as well as my family. I was also able to help some of my friends and neighbors by lending them small amounts of money. 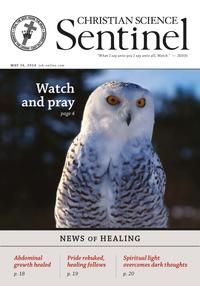