The city foursquare, and healing

Mary Baker Eddy’s discovery of Christian Science, which is based on a scientific, spiritual understanding of God, is as revolutionary today as it was when she discovered it in 1866. She describes how to reach this understanding of God in her book Science and Health with Key to the Scriptures, in which she has reduced divine metaphysics “to a system, to a form comprehensible by and adapted to the thought of the age in which we live” (pp. 146–147). In the Preface she explains healing in Christian Science as the “operation of divine Principle, before which sin and disease lose their reality in human consciousness and disappear as naturally and as necessarily as darkness gives place to light and sin to reformation” (p. xi).

In some ways this phenomenon is similar to mathematics where a mistake such as two plus two equals ten is corrected by the fact that two plus two equals four. Just as any mathematical error can be corrected by recognizing what is true, the errors of material sense can be corrected or eliminated by spiritualizing consciousness. Then, all that is unlike God, or good, disappears much as all the wrong answers can’t fool someone who understands mathematics.

Hal Shrewsbury is a Christian Science practitioner and volunteer chaplain who lives in San Antonio, Texas. 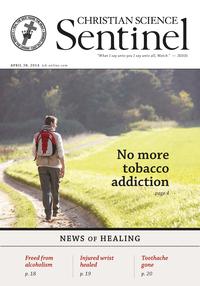