The power of spiritual dominion

For the Lesson titled: "Is the Universe, Including Man, Evolved by Atomic Force?" from December 15-21, 2014

Theories about the universe—when it began, how it will end, and what happens in between—have perplexed individuals since time began. Even time itself is questioned. Mary Baker Eddy posed and answered similar questions in her extensive writings on Christian Science. In this week’s Bible Lesson in the Christian Science Quarterly, titled “Is the Universe, Including Man, Evolved by Atomic Force?” Eddy gives solid proof that the universe evolves through spiritual power, not atomic force.

More than 2,500 years ago David, author of many of the psalms, looked up at the sky, the moon, and the stars and caught a glimpse of God’s creation. He prayerfully sang: “When I consider thy heavens, the work of thy fingers, the moon and the stars, which thou hast ordained; What is man, that thou art mindful of him?… Thou madest him to have dominion over the works of thy hands” (Psalms 8:3, 4, 6, citation 2). Much later, Mary Baker Eddy wrote, “Man, made in His [God’s] likeness, possesses and reflects God’s dominion over all the earth” (Science and Health with Key to the Scriptures, p. 516, cit. 3). 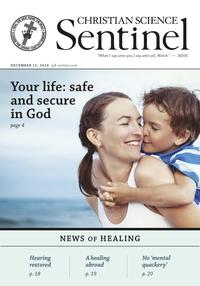