Healed after a fall

This testimony was originally written in French and published as a teen article in the September 2014 German, French, Portuguese, and Spanish editions of The Herald of Christian Science.

It was the season when mangoes are ripe, and I was looking forward to eating some. In the subdivision where I lived, there was a tall mango tree, and one morning I saw two ripe mangoes on one of its highest branches. I decided to climb the tree and pick the fruit.

I was very close to the fruit and almost ready to take it, but as soon as I put my foot on the tallest branch, I felt that something was wrong and it would probably not hold me. So I quickly moved my hand to grab another branch in close proximity, but it broke and I fell. As I was falling, branches cut my lips and my back, and they also hit me hard, especially my back. As I landed on the ground, I fainted. 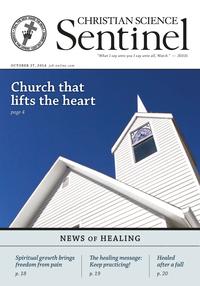