Relieved of back pain on cruise

In late October of 2012, I joined some friends on a fall cruise touring New England and Canada. The morning we were scheduled to leave for the port, I bent down to put something in my suitcase and suddenly felt a sharp pain in my lower back. It felt as if I had severely pulled a muscle. I was able to stand and walk, but by the time my friends and I got to our shared cabin, I found it quite painful to get up after sitting down. I‘d had previous bouts with lower back pain for almost ten years, and most times it usually took several days to recover.

My first reaction to this new incident was fear. I feared that it would take a long time to heal, and because of that I wouldn’t be able to participate in any of the cruise excursions we had booked. Although I didn’t say anything to my friends as we were unpacking, I could tell that they noticed I was uncomfortable. I knew they were concerned even though no comments were made.

Send a comment to the editors
NEXT IN THIS ISSUE
Testimony of Healing
Jealousy resolved, toothache healed 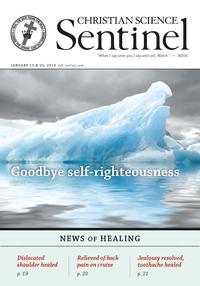