In the wake of the attacks in Newtown, Connecticut, and Aurora, Colorado, among others, people are seeking ways to prevent such occurrences. Sandwiched between the debate on gun control and the negative influence of violent themes in entertainment is a concerted effort to understand what causes individuals to act out and bring harm to others as well as themselves.

Some feel that solutions are to be found in the pharmaceutical industry, which has accelerated its research and production of treatments for a host of what are considered dysfunctional brain maladies. Psychiatry points out that the perception people have of themselves and others is subject to an array of distortions and delusions, based on ever-changing activity within the brain. It suggests that intelligence, memory, behavioral responses, and reactions are subject to certain neurological connections.

Diane Dailey is a practitioner and teacher of Christian Science based in Los Angeles, California. 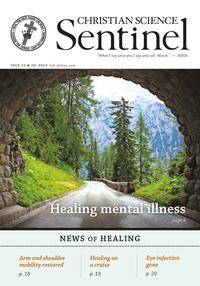