Several months ago, I came down with the flu. I called my Christian Science teacher to help me through prayer and asked her why I felt the disease was so real. She said that rather than listening to mortal mind, I could know that in actuality I am one with divine Mind. I recovered quickly.

However, only a few weeks later, I again came down with the same symptoms—and this time they were much more serious. As I prayed, I looked up the words suffering and suffer in the writings of Mary Baker Eddy, the author of Science and Health with Key to the Scriptures. One citation that I found came from the chapter titled “Physiology.” It reads: “Mortal mind alone suffers,—not because a law of matter has been transgressed, but because a law of this so-called mind has been disobeyed” (p. 184). To me, this confirmed what my teacher had said the first time I called for help, and now—by turning more wholeheartedly from the physical complaint to spiritual truths—I could understand what she meant even more clearly. Nevertheless, the symptoms lingered. 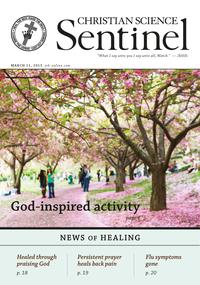