One day, about a year ago, I woke early, but was unable to get up because I felt very dizzy. As I lay in bed, I thoughtfully prayed with some ideas I like to think about before getting up in the morning. I especially focused on the Lord’s Prayer (see Matthew 6:9–13) and its spiritual interpretation, which Mary Baker Eddy gives in Science and Health with Key to the Scriptures (pp. 16–17). This prayer is always so familiar and comforting.

About half an hour later, I tried to get up again but could not. My head was swimming, and I was afraid I might fall over. I reached for my iPod and lay there listening to the weekly Christian Science Bible Lesson. The subject was “Christ Jesus.” I listened thoughtfully to every word, claiming the spiritual truths stated as facts of my being and recognizing the spiritual identity of man, which was so clearly expressed through Jesus’ ministry. 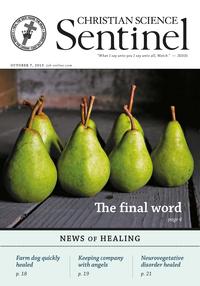