For some years now, I’ve worked as a full-time actor in Hollywood, appearing primarily in TV, film, and commercials. In the acting business, as well as in many other human endeavors, there’s a widely held sense of competition—which says many individuals are vying and even struggling for any particular job. In fact, this kind of competition seems to be generally viewed as normal! I’m grateful to be always learning in Christian Science the truth that man, as the idea of God, is never in competition with any other idea of God. Each individual is a complete idea, just as every number is a complete idea. The number five is not in competition with the number eight. Each individual, like each number, is one of a kind, and can in no way take the place of or be replaced by any other individual.

Does this mean that when I show up for an audition, I’m the only actor sitting in the waiting room? Certainly not! Depending on the type of project, it’s not unusual to walk into a room filled and overflowing with lots of guys—and they often look just like me! What I’m talking about is bringing into that room a still, confident spiritual awareness of not only my own God-given individuality, but also of the spiritual nature and individuality of every other actor there. It has to apply to everyone, or it doesn’t apply to anyone. An experience I had some years ago has stayed with me as a vivid example of “no competition.” 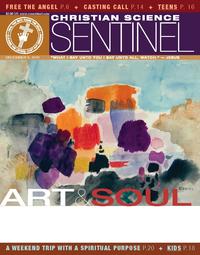