On January 1, 2010, the front page of India's largest English language newspaper looked different. Replacing the usual headlines were the words "Love Pakistan." The whole page advertised the launch of "Aman ki Asha: Destination Peace," an initiative for peace between the peoples of India and Pakistan. This effort, which can also be translated "Hope for Peace," is being made by two media groups, the Times of India and the Jang Group of Pakistan, to bring together ordinary citizens of both countries through the exchange of ideas, music, art, and culture. This is a bold move when considered in the light of a history of tense relations between Pakistan and India.

Independence from British rule in 1947 included the partition of India along religious lines. This led to the creation of a Muslim-majority Pakistan, carved out from an India that had a majority of Hindus. More than a million people are estimated to have died in the migration that took place at that time, as well as in the accompanying riots.

Annu Mattai is a Christian Science practitioner in Bangalore, India. 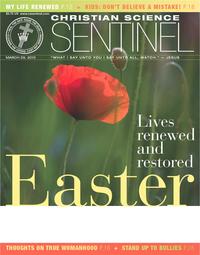