THE ETHICS OF THE ELECTED

IN THE UNITED STATES, many state governments are finding the importance of passing ethics reform legislation to clarify the relationship between state businesses and the money used to fund political campaigns. In the State of Illinois an Ethics Reform Act went into effect January 1, 2009, promising a new standard for contractors and government officials. Nonetheless, a record number of federal corruption charges are being prosecuted against those who have built their careers on influence peddling.

A spiritual perspective can help keep us active in prayer as the reform measures take effect. The New Testament urges prayer for people in authority (see I Tim. 2:1, 2). But how do we pray to uphold our elected officials when they are under criminal investigation? 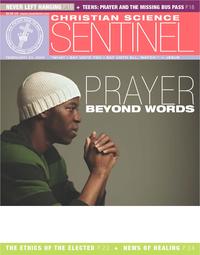