Pro Mujer: A door of opportunity for Latin American women

Half of all children in Latin America live below the poverty line, the Vice Chairman of the UN Committee on the Rights of the Child reported last year. Most, if not all, of their mothers would like to change that, but they lack educational and employment opportunities. One way past those obstacles is Pro Mujer ("Pro Woman"), an international microfinance and women's development network, which began in Balivia in 1990 and today includes Nicaragua, Peru, Mexico, and Argentina. The Sentinel's Rosalie Dunbar recently spoke with one of Pro Mujer's founders, LYNNE RANDOLPH PATTERSON.

"Prayer is vital to the way I live and the work I do," Lynne Patterson says, speaking of her personal approach to Pro Mujer. As a Christian Scientist and Executive Director of the organization, she explains that while neither religion nor politics has a role in the organization per se, Pro Mujer accomplishes much more than just borrowing and repaying money. "It changes the way people think about themselves," she observes. 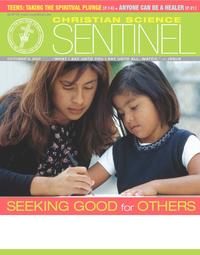