A GOOD IDEA, A CLEANER ENGINE

ACCORDING TO THE LOS ANGELES TIMES, beginning next month one of the largest shipping companies in the world launches an experiment at the Port of Los Angeles. It centers on an innovative fuel system for cargo ships that employs what's called a fuel emulsification process. Water injected into marine fuel oil creates a mixture that's four-fifths oil, one-fifth water. This lowers the temperature at which combustion takes place, and the oil burns more completely. Fewer pollutants remain to escape into the atmosphere.

The outcome of the experiment could prove significant for the health of both individuals and the environment. If it's successful, the end result could be a major reduction in the emission of nitrogen oxides, sulfur oxides, and particulates coming from cargo ships—the type of pollution linked to a range of respiratory illnesses, as well as to global warming. While emissions from autos tend to grab most of the public's attention in the battle against global warming, a single cargo vessel, with its enormous diesel engines, can produce about as much exhaust as 12,000 cars do in a day ("Shipper to test system to cut emissions," by Dan Weikel, December 5, 2006).

Send a comment to the editors
NEXT IN THIS ISSUE
Testimony of Healing
WHEN GOD CAME FIRST, SUCCESS FOLLOWED 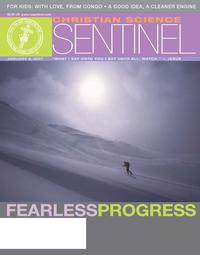