At the beginning of a new year, people of faith often commit themselves to spending more time in prayer, acknowledging their need to rely more completely on God's power, protection, and provision. This reliance lies at the heart of the Lord's Prayer, our focus this week in the third in a series of features that explore the "first lessons" taught in Christian Science Sunday Schools.

University of Southern California philosophy professor Dallas Willard wrote recently that when he gets to the end of the Lord's Prayer, he doesn't want to say, "Amen." That's "just a little too mild," he says. He wants to say, "Whoopee! Thanks be to God!" 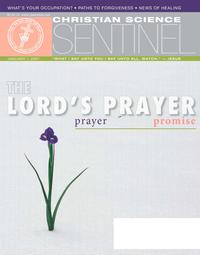