The human face of war

I've been deeply moved by an article in The Christian Science Monitor, "Is anyone ever truly prepared to kill?" (September 29, 2004, p. 14). It's about the inner struggle and guilt soldiers often have when they realize they have killed other human beings in the course of combat. This mental struggle is a problem both the military and society often tend to avoid talking about—making it even more difficult for soldiers to deal with, sometimes for years.

According to the article, the military establishment in the United States is beginning to address the need to better prepare soldiers in advance for the heart-wrenching effect of killing—an act that goes against the natural human instinct to love and protect one's fellow beings. "Along with several studies, the efforts of two men are stirring thinking within the US military: [Former Army Ranger, Lt. Col. David] Grossman, who wrote On Killing: The Psychological Costs of Learning to Kill in War and Society, and Dr. [Jonathan] Shay, who has worked with vets for 20 years at the VA Outpatient Clinic in Boston. Shay has written two books (Achilles in Vietnam and Odysseus in America) that provide in-depth analyses of how combat can affect individual character and the homecoming to civilian society. The military has hired both [men] to help improve training and recommend changes to military culture."

Barbara Vining is a contributing editor. She lives near Toledo, Ohio. 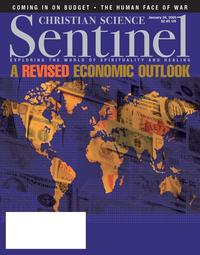