'A change in human belief'

For years I'd been suffering from gallstones and from the severe pains that regularly accompanied them. I had gone to see doctors when I had acute gallstone colics, to get relief from the pain through medication. Almost all of the doctors had advised an operation. But I was afraid of surgery.

Since I thought what I ate might be contributing to the gallstones, my way of dealing with this was to avoid certain foods. But the list of foods that I didn't think I should eat became longer and longer. 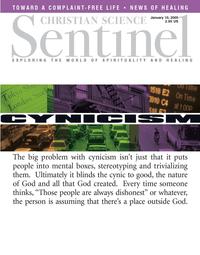