'What shall we eat?'

WITH ALL HER WICKED WILES, and a tempting "Want a bite?" the witch held out that gorgeous, gleaming, deep-red apple to Snow White. It was surely the most perfect apple in the kingdom. Or was it? What Snow White couldn't see was that the apple had been dipped in poison, so not only would that apple, that day, not keep the doctor away, but one bite of it would keep Snow White asleep ... for a long time.

And what about that fruit-related, blame-passing embarrassment in the garden of Eden? Even apples can get some pretty bad press, can't they? But in both cases, it wasn't really the apple that was the culprit. It was the poison. And the disobedience. Maybe it's not such a smart idea for parents to tell their children that eating an apple a day will keep the doctor away. 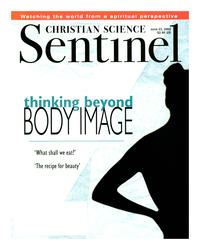