A walk out of darkness into light

When Kenny Simmons found a way to feel closer to God, he also found a new life, a new job and home, and friends who care.

HE LOOKS ME IN THE EYE, smiles, offers his hand, and says, "Hi, I'm Kenny Simmons. Pleased to meet you." Don't bother looking in Kenny Simmons's eyes or at his bearing for shadows of his life on the streets, on drugs, in jail. I saw none. When he talks about his past, it's as though he's describing another person, someone he only vaguely recalls.

Simmons remembers clearly, though, how he became homeless and jobless. "I was addicted to cocaine and to alcohol, and my life at that time had crumbled. I lost a good job and was in total darkness. It seemed as though I was washed up. 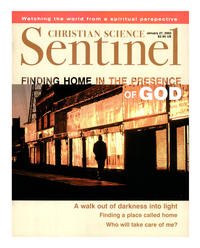