The young people of Chokwe, Mozambique

Update from a Peace Corps volunteer

Last September , the Sentinel ran an interview with Blake Schmidt of Portland, Oregon, shortly before he flew off to begin a two-year tour of duty as a Peace Corps volunteer in Africa. He has now completed his first six months of teaching English to ninth and tenth graders in a school in Chokwe (pronounced SHOKE-way), Mozambique, which is close to the flood plains of the Limpopo River. It's about three hours' drive north of the capital, Maputo. Blake spoke with us during a summer furlough in the United States.

"It's quite a leap from the classrooms I grew up in to the classrooms I now teach in, where windowpanes are often missing and the blackboards are badly worn and hard to write on—damaged by the floods of two years ago," says Blake. 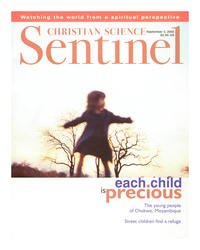