"IMAGINE LIFE WITHOUT TELEVISION . Until 1999, the residents of the isolated mountain kingdom of Bhutan were the last people on earth without access to the all-powerful medium. Two young reporters followed Rinzy Dorji, Bhutan's local 'cable guy,' as he spread video access throughout the Buddhist country. Their account, 'Channel Surfing in the Himalayas,' is one of three journalistic short stories to debut on 'Frontline World' (PBS) . . . a new series that focuses on stories, countries, and cultures rarely covered by US media.

"As you might have feared, television's presence has an immediate and hypnotic effect on the Bhutanese. Children who were once amused by playing with their dogs are now fighting with their older siblings over control of the remote. . . . The 'cable guy's' mother-in-law was a skeptic at first. She feared that he would lose his savings. 'What if people don't like TV?' she wondered. Now, she tells reporters, she has become so hooked on television that 'I forget to count my prayer beads.' "

Send a comment to the editors
NEXT IN THIS ISSUE
Article
Consciousness and the expanding universe . . . 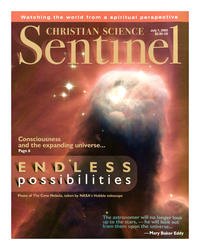