A spiritual approach to conflict mediation

Warren Bolon with contributions from Arthur B. Gingold

MANY FAMILIES, BUSINESSES, AND GOVERNMENTS are choosing mediation over litigation to settle disputes. Is there an effective spiritual basis for conflict mediation? The Sentinel's Warren Bolon talked with Arthur B. Gingold, president and managing partner of Barton & Gingold, a management consulting firm based in Portland, Maine. He is an experienced executive coach and conflict mediator, who relies on his faith in carrying out his work. Warren began by asking what goes on in a typical mediation. Arthur responds . . .

When I enter any kind of mediation process, I think about a book written by Roger Fisher and William Ury called Getting to Yes. They discuss the difference between positions and interest. When people come into a mediation situation where they're angry at each other, or where they're trying to accomplish certain ends, they assume positions. A position, for example, would be, "I want to sell you this pencil for 25 cents," and the other position is, "I want to buy that pencil for 10 cents." The positions are different, but the interests are the same. Both of them want a transaction. 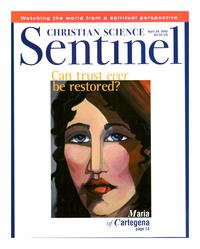