When our son, Japhet , was 15, he played in a summer hockey league in preparation for fall tryouts. At one of the games, a defenseman on the opposing team was taunting Japh in an unusually aggressive manner, obviously trying to rile him, even between plays.

At a relatively quiet point in the game, my husband, David, was stunned to see Japh suddenly hit that player across the back with his stick. Japh was thrown out of the game and sent to the locker room. 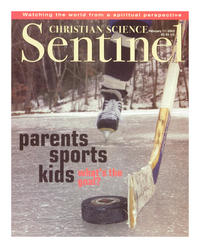