THE OTHER MORNING I heard a radio talk show host say that it might be a good idea if all the Muslim cab drivers in Manhattan were deported. A caller, concurring with the host, went on to say that maybe everyone named Muhammad should be deported.

Unfortunately, this kind of talk seems to be becoming more common. Right after September 11, 2001, it seemed there was a growing tolerance toward the mainstream Muslim population, which had been misrepresented by the extremist faction of that faith. But now it seems that antiIslamic talk is sprouting up again, generalizing hatred for all, based on the actions of some. Last month's sniper attacks in the Washington, D.C., area, carried out by a convert to the Muslim faith—someone by the name of Muhammad—could be stretched to lend support to this argument. 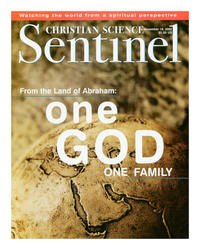