Womanhood and the search for peace

In 1986 The Christian Science Publishing Society published a book, prepared and edited by Richard Nenneman and Earl Foell, called How Peace Came to the World. The book was comprised of responses to the proposition that peace had come to the world, and the published essays set forth how it had come about.

Over a thousand essays were submitted, and 49 were chosen for publication. One of the winning entries was written by Richard Lamm, then governor of the state of Colorado in the United States. His proposition was that the world was shocked into peace after a nuclear exchange between India and Pakistan. 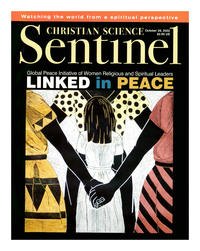