Periodically I would have a throat condition that made it almost impossible to swallow because of the soreness. Every time this occurred I would pray with this statement from Science and Health: "A spiritual idea has not a single element of error, and this truth removes properly whatever is offensive" (p. 463). With this prayer I was claiming my spiritual identity as God's child. Christ Jesus said, "Ye shall know the truth, and the truth shall make you free" (John 8:32). The problem gradually appeared less frequently, and for more than ten years now I have been completely free of it.

During my second pregnancy, problems developed that concerned the attending physician. He thought the pregnancy would end in a miscarriage, but it didn't, although problems persisted. A Christian Science practitioner helped me to realize the truth of this statement: "In Science man is the offspring of Spirit. The beautiful, good, and pure constitute his ancestry. His origin is not, like that of mortals, in brute instinct, nor does he pass through material conditions prior to reaching intelligence" (Science and Health, p. 63). The birth came about two months early. Contrary to the dire predictions about our son's well-being and mine, however, we were untouched. The statement from Science and Health referring to the identity of God's child continues, "Spirit is his primitive and ultimate source of being; God is his Father, and Life is the law of his being." 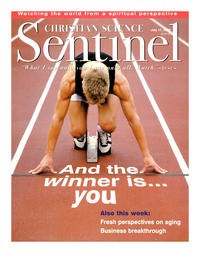