"You have every right to know that God is your constant companion."

"THANKS! I KNOW that sharing your ideas for an article was just a friendly gesture with no intent to make me do anything, but they really hit home and forced me to think things through more thoroughly. I guess what I've learned is that I am never alone, whether in the middle of the night, on a snow-covered road, at home, or at work. I was forced to see God as my constant companion with His arms ever around me, whispering ever so tenderly of His eternal love. But sometimes I have to ask Him to speak a lot louder!"

A friend wrote this after she'd read some notes that later became an article for this magazine. She had lived with her dad for many years and had never lived on her own, so when her dad passed on, she had to make lots of adjustments. Disposing of her dad's possessions, leaving the home and property she dearly loved, and finding a new home weren't easy. In order to get through this uncharted territory, she says, "I had to learn that God was in charge, because I had never been a homeowner before." The result of her clear understanding that God's love would never let her down was that within six months she had done all that could be done and had moved into a new home, just as it was being finished.

(Robert A. Johnson is a columnist for the Sentinel.) 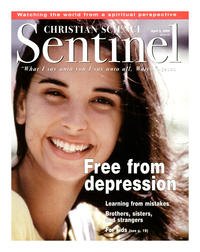