"'I decided that I wasn't going to get so set in my ways that I would be crabby.'"

Have you heard anyone say, "The older Uncle Charlie gets, the crabbier he gets"? I have. That is one image some people have of old age. But haven't you also heard someone say, "Uncle George and Aunt Carol are getting older, but they haven't changed a bit. They're still fun to have around"?

What is the difference between ill-tempered Uncle Charlie and fun-to-have-around Uncle George and Aunt Carol? Perhaps former President Jimmy Carter had the answer when he addressed three thousand members of the American Society on Aging at its annual conference. Encouraging participants to "keep a spirit of adventure and live a dynamic life, whether we are 56 or 66 or 86," Carter said, "We grow old when regrets take the place of dreams. I hope you will all continue to dream. The most important thing is what you are able to do for other people" (The Christian Science Monitor, March 10, 1999). Those who follow this advice have no time to be crabby. They are having too much fun being useful, contributing members of society.

(Robert A. Johnson is a columnist for the Sentinel.) 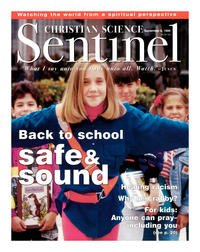