Praying for pets and farm animals

I've Been Around animals—farm animals, house animals, wild animals—all my life, and they are just as receptive to God's love as you and I are. God loves everything He made with tender affection, making His creation responsive to spiritual truth and love.

I love the story of Noah's ark in the Bible. In studying the account in Genesis, I was struck by God's powerful love for all His creatures. Think how much easier the whole ordeal might have been for Noah had he been instructed to build a boat only for himself and his family. Noah wouldn't have had to build such a huge boat. He wouldn't have had to gather food for the animals. He wouldn't have had to move them all in! (I especially appreciate this point, having faced severe frustration while moving just one pig from a stall to a trailer.) But because of God's love for all creatures, not one of them was too inconsequential to be left behind. As I pondered this, I realized then that every animal is an "ark animal." God cares for the least sparrow. In Luke we read, "Are not five sparrows sold for two farthings, and not one of them is forgotten before God?" (Luke 12:6). 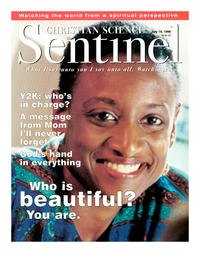