Earlier this year, several departments at Columbia University, New York, collaborated on a report examining aspects of the relationship between "religion, spirituality, and medicine." It was written by Drs. Richard P. Sloan, E. Bagiella, and T. Powell, and published in the British medical journal The Lancet in February.

The report points out that at various times worldwide, medical and spiritual care were dispensed by the same person. At other times, passionate (even violent) conflicts characterized the association between religion, medicine, and science.

Send a comment to the editors
NEXT IN THIS ISSUE
Article
Discover your individuality, your gifts 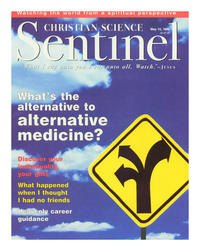