with contributions from Faye Flam, Paul A. Soukup, Marianne Williamson

"Though more than 90 percent of Americans believe in God and an afterlife, only 40 percent of scientists profess such beliefs, according to a paper published several years ago in the journal Nature.

"In a subsequent survey, the same authors showed that among the scientists who have been admitted to the elite National Academy of Sciences, the percentage of believers plummets to 7 percent. Most of those were mathematicians."

Send a comment to the editors
NEXT IN THIS ISSUE
Article
Technology Friend or foe? 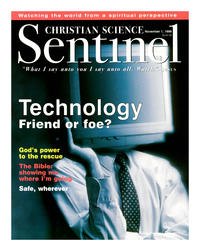