Daniel was a fourth-grade friend of mine. He'd had trouble learning to write, so we'd been working together. One day I suggested we do a character sketch of someone he respected—a family member, a historical figure, a friend, or perhaps a character from a book. Even after much good progress, Daniel didn't like to write and often tried to digress in order to avoid it. Before we could start our pre-writing brainstorming, he said, "Can I ask you something?" I wondered if he was attempting to veer off in another direction, but then he followed with, "How can you love your enemies?"

Daniel's question wasn't at all digressive. His thought had focused on a historical person he admired, Martin Luther King, Jr., and then moved to an idea associated with him, loving your enemies. Over the past several weeks, Daniel had mentioned Dr. King a few times as we talked and worked together. So I knew his thought had been touched in some way by this man's life. 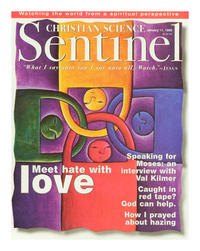