Last summer, while on vacation with my husband in the South American Andes,...

Last summer, while on vacation with my husband in the South American Andes, I became ill with a digestive disorder. At first I thought it would quickly pass. But after five days of not being able to retain any food or liquid, I was quite weak. I tried to pray for myself, but my prayers were hampered by the fear of being far from home in a country where Christian Science was little known.

On the day before we were due to fly back to Miami, I finally telephoned a Christian Science practioner. I poured out all my fears, and he agreed to treat me. He encouraged me to pray with some of the ideas we discussed, but my thoughts were so disturbed I couldn't remember anything he said after I had hung up the phone. Several hours later I phoned him back again and poured out all the same old concerns. This time he made a simple comment that made me realize that, like Adam in the garden of Eden, I had been wandering around believing that although God was omnipotent, there could be other influences in His universe capable of usurping His power.

Send a comment to the editors
NEXT IN THIS ISSUE
Testimony of Healing
When my vision was tested to renew my driver's license, I saw... 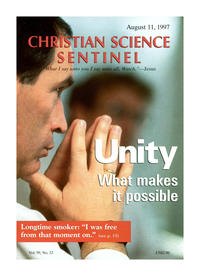