To wipe out prejudice

That summer day I had just taken a wrong turn off the freeway and lost my way in Los Angeles. I had never driven there before. I was also alone and not far from an area where there had been reports of racial strife. I decided to ask for directions from the first person I encountered.

Soon my car came abreast of a passerby and I called to him. He came to the passenger side, leaned down and rested his elbows on the open window. He was of a race that I had been taught as a child to fear and be prejudiced toward. As I began to ask for directions, his glance left my face and traveled down to rest on something on the seat directly below him. My eyes followed his and saw what he saw. Half-exposed underneath a state map was my handbag.

Send a comment to the editors
NEXT IN THIS ISSUE
Letters
The Sentinel: a catalyst for deeper study of the Bible and Science and Health 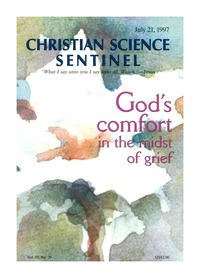