Religious liberty and the hidden issue

Ultimately , there is no other freedom on earth as precious as religious freedom. The right to believe in one's God, balanced with a responsible practice of that belief, provides for all mankind the truest and most fulfilling kind of liberty. The right to turn to God, to make Spirit paramount in one's life, is the right to let the things of Spirit—the permanence of joy, innocence, goodness—rather than the things of matter be real substance in one's daily affairs.

The things of matter—how substantial are they? Physicists tell us that matter is not at all the kind of solid substance we thought it was a century ago. What will they tell us in another century—or much sooner? That the world is even less substantial than we thought at the end of the twentieth century? That it's more a projection of the observer than an independent entity? That matter isn't so much "things" as it is a limited, or even mistaken, way of defining things?

(Nate Talbot is a contributing editor.) 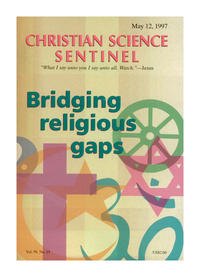