Is a little evil OK?

When I was a very young boy, I brought home a fifteen-cent item without paying for it. I didn't mean to do anything dishonest; I just didn't think about paying for it. My mother ordered me to go back to that store immediately and return the item. That made a big impression on me. It was plain that my mother didn't think a little evil was OK, but she never said why. Her reprimand was enough, though—I never took anything again without paying.

Not until a number of years later, when I began to read the Bible regularly on my own, did I begin to understand why a little bit of evil was not OK. I found that to live up to my full potential as a child of God, I had to resist evil in all its forms. To heal and to be healed—to be prosperous in the most spiritual sense of that word—I had to live and think as closely as I could to the way God would have me live and think. As Christ Jesus said, "Blessed are they which do hunger and thirst after righteousness: for they shall be filled. ... Blessed are the pure in heart: for they shall see God" (Matt. 5:6, 8). Nothing in Christ Jesus' teachings contradicts these sayings. He consistently condemned evil and told those who sinned to stop sinning. 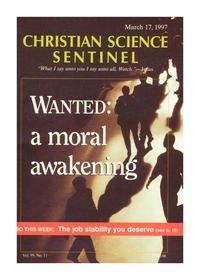