One of the most famous battles ever fought was David's battle with Goliath, when Israel's king-to-be was still a shepherd-boy. (See the first book of Samuel in the Bible.)

When David appeared on the scene, Goliath was taunting the warriors of the army of Israel and mocking the God they served. They were spellbound by this gigantic, apparently invincible adversary. David's approach to this battle was different from his countrymen's—he didn't start quaking or feel overwhelmed. Before engaging in combat with this foe he redefined the battle as being not really his, nor an army's, but God's. The Bible records his heartfelt assertion: "The battle is the Lord's, and he will give you into our hands" (17:47). He must have known that the lie of a personal, powerful evil—in this case symbolized by Goliath—could not stand before the all-power of God. 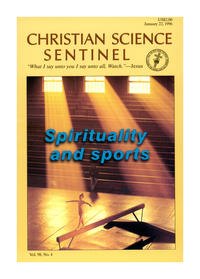