Update from the General Counsel of The Mother Church

On August 30, 1995, Judge Vieri Volterra of the Massachusetts Superior Court denied the motion for summary judgment filed by present and former officers of The Mother Church in the lawsuit known as Weaver, et al. v. Wood, et al.—a case which challenges the government of the Church, including The Christian Science Publishing Society. Rendering his decision only two days after oral argument by the attorneys for the parties, Judge Volterra declined to enter judgment dismissing the complaint at this early stage in the proceedings. According to the judge's opinion, there are significant factual disputes between the parties that must be resolved through a trial, and neither the state nor the federal constitution prohibits the case from going forward.

The effect of Judge Volterra's decision is to permit two church members bringing this suit to continue to press their arguments before the court concerning the meaning of founding documents of the Church. In particular, the plaintiffs are asking the court to interpret and fundamentally change the Church Manual by Mary Baker Eddy and the 1898 Deed of Trust, which established the Publishing Society. 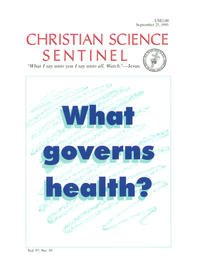