Late in 1993 I woke one morning with much pain in one big toe. Immediately I prayed. There is no sensation in matter, I reasoned, because spiritual truth denies such a possibility. The condition did not improve, but I had no fear whatsoever that healing would not come. Later I decided to cancel an appointment in a town some distance away.

The person I was to visit, a longtime friend who is also a Christian Science practitioner, sensed something was not right. We discussed on the telephone the possibility of her praying for me, and agreed that she would begin to do so. 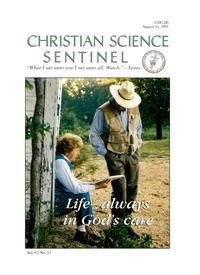