As a young person, before I became a member of the Christian Science Church,...

As a young person, before I became a member of the Christian Science Church, I took to smoking a pipe. Then I acquired a beautiful, hand-painted crock in which to put my tobacco supply. Later I quit using a pipe and began buying cigarettes, smoking a pack a day.

My mother was a Christian Scientist. In my later youth I wanted to join the Church, and I knew I would have to give up smoking before I would be accepted for membership. I tried to quit smoking several times, but each time would go back to it. So I called a Christian Science practitioner, my mother's friend, and she agreed to pray for me.

Send a comment to the editors
NEXT IN THIS ISSUE
Testimony of Healing
One Tuesday morning I was rushing around, trying to tie together... 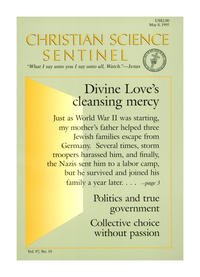