The Christian Science Sentinel—taking its place and filling it

The Sentinel, as we know it today, appears in the form of a weekly magazine, a weekly radio broadcast, and on audio cassette. Yet, the initial thought of its founder, Mary Baker Eddy, was that the Sentinel would be a newspaper.

In 1898, Mrs. Eddy sent a letter to one of the Trustees of The Christian Science Publishing Society, saying, "The dignity of our cause and the good of the students demand of us to publish a weekly newspaper." A few weeks later, the Christian Science Weekly, its original name, was being published. In addition to articles on Christian Science and testimonies of healing, it also contained international, national, industrial, commercial, and general news of the day. 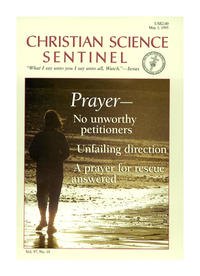