Understanding the falsity of fear

There I was, inside a small airplane five thousand feet in the air and climbing. I looked out the tiny window at the ground, which was getting farther and farther away. "Butterflies?" my skydiving instructor asked me. "Not yet," I replied, and I silently added, "And I don't expect any!"

Although this was going to be my first jump, I was confident that I wouldn't be frightened because during takeoff I had glimpsed something of the unreal nature of fear. A typical recreational skydiver who fearlessly partakes of the sport on a regular basis was probably nervous before his first jump. The sport didn't change between his first and hundredth jump, but his thought about it did. Could it be that his fear was caused by a preconception of the activity and not the activity itself? Once he took his first jump, he realized that his mental concept of what it would be like was not accurate and that it was actually a joyous, fun activity worth repeating! 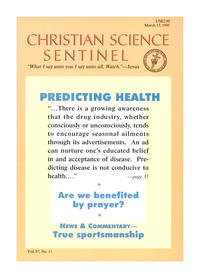