It was something of a surprise to read in an edition of The Weekend Australian...

It was something of a surprise to read in an edition of The Weekend Australian, one of Australia's national newspapers, a small article headed "1.5m behind bars in US." The statistic is correct, however. In fact, a record 5.1 million Americans were either behind bars or on probation or parole at the end of last year. That amounts to almost 2.7 percent of the adult population. As debate about the merits and dangers of imprisonment goes on, the Sentinel is presenting this week the experiences of two authors who had very different encounters with prisoners. In each case, however, the openness to healing brought insight and something deeper—the touch of the Christ—to those involved. 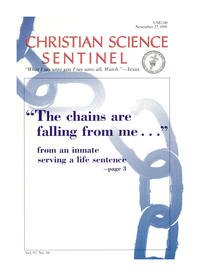