Help for the world's hates

Whether it takes the form of racism, religious bigotry, ages-old tribal conflicts, or personal antagonisms between neighbors or family members, the world's hates are among the most debilitating evils humanity confronts. The toll of lives lost in Bosnia, for example, or in the Middle East, and in the gang wars and senseless violence in American cities, offers stark testament to the destructiveness of hatred. Sometimes the human heart cries, Will it never end? The history of mankind would argue that it never has, so why should we expect anything different in the future. And simplistic answers, such as "we just need to love more," don't really satisfy us in the face of the horrific evidence that can seem so overwhelming.

Yet if we look realistically at some of the underlying causes of hatred and then cast the healing and redeeming light of spiritual truth on the situation, we may discover that there actually is a significant contribution each of us can make to healing mankind's antagonisms and bitterness. 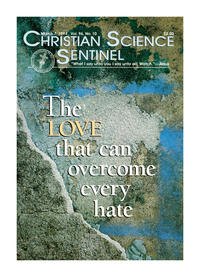