There are a number of reasons for waiting. One of them is waiting for things to change—a change in the economy, the weather, even a traffic light! It might seem there's so little in our lives under our direct control that we've grown accustomed to waiting for most things to change on their own. Even when it comes to our health, have we slipped into waiting for it somehow to change for the better, rather than taking control and healing disease and disability as Christ Jesus taught us to do?

According to the Gospel of John, there were large numbers of sick and disabled people who were waiting for a material change they believed would bring healing. These people, gathered at the pool of Bethesda, were "waiting for the moving of the water." They attributed this movement to an angel, and believed that whoever first entered the pool after the waters moved would be healed. For one person by the pool, an invalid for many years, change did occur. The man was healed. But not because of an encounter with the water. Rather, it was an encounter with Christ Jesus (see John 5:1–9).

Send a comment to the editors
NEXT IN THIS ISSUE
Testimony of Healing
More than twenty years ago I was encouraged to explore... 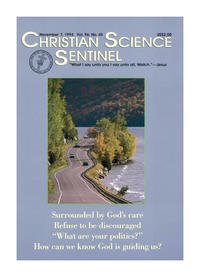