It isn't always easy to size up events right away. But later, with a higher spiritual perspective brought to them, we notice things we hadn't seen earlier.

Take the story of Moses, in the book of Exodus. His mother looked for a way to shelter him, as an infant, from the murderous intent of Pharaoh. Her highest sense of God's guidance was to put her baby in a basket—a little ark—and set it in the reeds near the edge of the river. Notwithstanding the threatening circumstances, how risky that action could seem; how unprotected the baby may have appeared. Yet an amazing series of events unfolded which this trusting mother couldn't have predicted or imagined. Pharaoh's daughter found the child and made special provisions for his care. As it turned out, Moses' own mother was chosen to nurse him. The seemingly vulnerable infant, marked for death, was to grow up in Pharaoh's household, eventually to play a pivotal role in the history of mankind's moral and spiritual development.

Send a comment to the editors
NEXT IN THIS ISSUE
Article
Send us your good news! 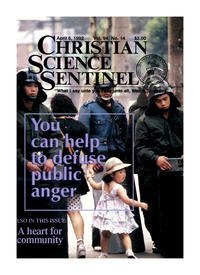