The role of expectancy in healing

Jericho—known as the city of palm trees, the oldest city in the world. From Jerusalem, Jericho was seventeen miles by foot. And two thousand years ago, this was one of the places Jesus visited to bring his ministry to the people of Judea. Apparently a large crowd gathered around him while he was there, for as Jesus was leaving the city with his disciples, "a great number" of the townspeople followed him. On the roadside a man was sitting who made his meager living as a beggar. The Bible tells us his name was Bartimaeus, and he was blind.

Undoubtedly there was a stir among the people as Jesus headed out of Jericho. And when Bartimaeus heard who it was that was passing by, he cried out, "Jesus, thou son of David, have mercy on me." Many of the people attempted to quiet Bartimaeus but their efforts only caused him to be more insistent. He must have known of Jesus' extraordinary work as a healer. Perhaps he even felt something right then of the presence of the Christ-power. As Bartimaeus realized that he might actually be able to speak to the Master, was the hope of healing now kindled in his heart? Did the faith that Jesus would see in Bartimaeus indicate some inner conviction, some expectation, in fact, that he would be healed? 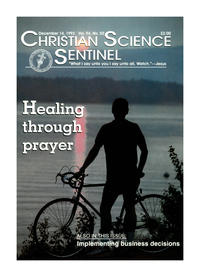