Tropical rain forests and the welfare of mankind

There has been considerable news coverage of environmental issues over the last several years as people come to see that the health of our planet relates directly to the immediate welfare of every inhabitant of the earth. Most recently, news reports have focused on the destruction of tropical rain forests, including vast areas in the Amazon region of Brazil. Annette Heckrath, a Christian Scientist whose home is in Brazil, has worked closely with the Sentinel's editors in developing this month's guest editorial.

A recent article in a newspaper is a good example of the challenge that our world faces when trying to come to grips with environmental destruction. After reading it one can't help wondering what the truth is. On one side, government officials, commenting on the deforestation of the Amazonian rain forest, say that only a small part of the forest has been burned. On the other hand, some environmentalists say that the destruction of the rain forests in the Amazon and worldwide is extensive and already damaging to our planet's environment. 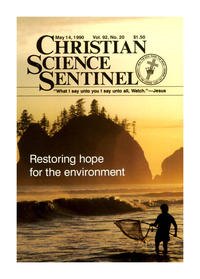