Although I attended a Christian Science Sunday School during...

Although I attended a Christian Science Sunday School during my preteen years, it wasn't until I was married and had a family of my own that I consistently based my life on what I was learning as a student of this unique religion. During the past thirty years it has been my guide in doing my best.

Our five active children have had many healings through Christian Science, and we have learned some wonderful lessons along the way. They've experienced healings of earaches, abdominal pains, impetigo, a severely injured leg resulting from a fall, sprained ankles, persistent nightmares, and bee stings. A lung condition was healed at the premature birth of our twin boys (doctors had believed death was likely because of the condition). Our daughter was protected from injury when a Tennessee walking horse fell on her, and a sickly, underweight child was restored to normal health.

Send a comment to the editors
NEXT IN THIS ISSUE
Testimony of Healing
As we read in II Corinthians, "Thanks be unto God for his... 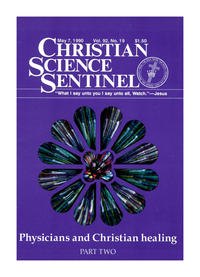